What We Ate: Vegan Family Meals from Aldi for Less Than $10

If you don’t know this already, I am a huge fan of Aldi’s. Even before they launched their own vegan line called Earth Grown, I have been shopping there as they are the best priced grocery store in the urban area where I live. I also love that their stores are compact and encourage people to bring their own bags (or reuse the store’s shipping boxes) since they charge for every bag you buy.

I now know the layout of the store and can be out in 20 minutes with a week’s worth of groceries. There’s also a rotating selection of specialty, organic, discounted and home goods items (which would take you longer than 20 minutes to peruse!) so it doesn’t get too boring. I’ll have more tips for finding deals at Aldi in later posts.

But enough about Aldi! I’m going to tell about two deliciously filling meals I made this week with ingredients found at Aldi for less than $10!

This meal was completely spontaneous as both of these items are not on regular rotation at our store but I was excited to find them this week. I followed the directions on the packaging and threw in some sweet cherry tomatoes and vegan mozzerella in the roasting pan (you could also add garlic cloves). For our family of two plus toddler (who refused most of the meal) I only used half the eggplant and sauce, so for a family of four, just use the whole portion and two packs of gnocchi.

Here is a price breakdown.

If you are only using half the eggplant cutlets, then the total price is $9.11 (and you won’t use all the cheese, save it to make vegan pizzas later in the week!). If you use the whole box, it’s just over $10 at $11.11!  You cold also just use any pasta, which is very inexpensive at Aldi as well. The eggplant is the star of this meal.

I was feeling creative and made a pesto sauce from pumpkin seeds to add to the gnocchi, which I will post later. But this meal would be complete without that added sauce.

I didn’t get a good picture of this before it was gobbled up, but it was a winner for sure! I used some of the IKEA veggie balls that we had on hand, but you can easily use the frozen Earth Grown Meatless Meatballs instead.

Confession: I don’t actually know what Swedish Meatballs are supposed to taste like. These are just meat free protein balls simmered in half a bottle of BBQ sauce!

The mashed potatoes are my special recipe, but you can make basic mashed potatoes using unsweetened plant milk and vegan butter or olive oil. To make it extra creamy and flavorful, I add a few dollops of vegan mayonnaise and dashes of dill and onion powder, but I did not include all these pantry staples in the price list.

For sides, I added corn and broccoli from the frozen aisle, both only $0.79 at Aldi. 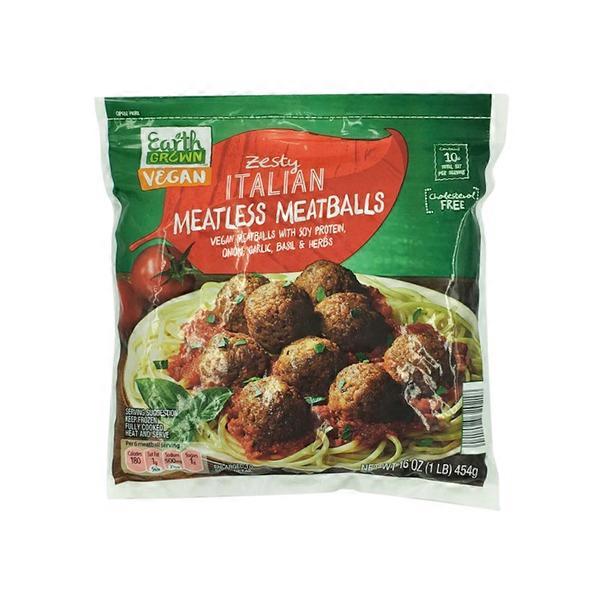 For these meals and our others, including some pantry restock, snacks and breakfast (lunch is usually leftovers or a sandwich/veggie burger), I spent $68 at Aldi in two trips. I also made a trip to our natural food store for some vitamins and specialty items, which totally $44. I try to keep our weekly budget for groceries around $100-$120.

You can check weekly Aldi price lists on this site, https://www.simplegrocerydeals.com/aldi-price-list/

If you are interested in trying the Vegan Meatballs from IKEA, I highly recommend them, (if you happen to be near and IKEA store!) as they are more ‘veggie’ based, soy-free and gluten-free. This big bag is $7.99, or about $3.63/lb, which makes them even cheaper than the Aldi ones.